Having been using the first windows RT tab from Microsoft for some time now tempted me write this article.

There is no doubt that Surface is there to give a run for the money to the major tab manufacturers. After Apple, only Microsoft is the company which is coming close to being the owner of both the Operating System and the Hardware. 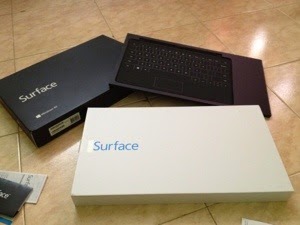 Surface is less of a tab and more of mini laptop or a netbook. The reason I am telling this because it is really big and slightly on the heavier side compared to tabs. But considering the fact that it has a keyboard which I feel is the best feature the weight factor can be ignored.

With SkyDrive you get the facility to sync up your docs across multiple devices. Very similar to Google Drive. So you will be more homely and laptop/desktop feel will be there.

This is one aspect where Microsoft will have to work hard. With around Millions of apps on iTunes store, the Windows App Store has very less. We still need to look for good apps to be used. Till the app developers believe that the market is there they will not develop apps fir the store. At least from my recent talks with some of my friends in the mobile app industry, windows does not even exist in their long term plans. So better be careful.

Surface is certainly a good experience while watching movies. It is because of its extra long size. more suited towards the movie experience. Also its in built stand certainly helps in adding to the easiness while watching the movie. No need to hold or buy another stand.

This is the best feature in the surface. And trust me because of this, the ultra book market might get run for their money in future. It smoothly integrates with the tab. It is easily detachable as well. Till now it has detected all the presses from my fingers, so can't give bad review for that. It is more of getting used to it. Do remember that it took good time before users started accepting touch screen keyboards.

Well overall I didn't face much of an issue till now except for the wifi. This I have seen across the forums on the net, that it is not only me. The case with me is that frequently the surface forgets my network or the wifi shows as limited. It works on the other devices, so might be something to do with software.

No doubt Windows 8 feeling is exactly the same as on the windows 8 on ultra book. Except the wifi issue I didn't find any problem. Also there are some patch updates, common with Windows :) which can resolve the wifi issue. May be mine will also go away.

Overall it is good alternative to netbook. But not a replacement for tabs. It is an extra large tab or a mini netbook.

So user can buy it if you are constantly ob the move and don't want to carry your laptop around, but still want that type keyboard experience.
Posted by Neeraj K Jaiswal at 2:43 PM